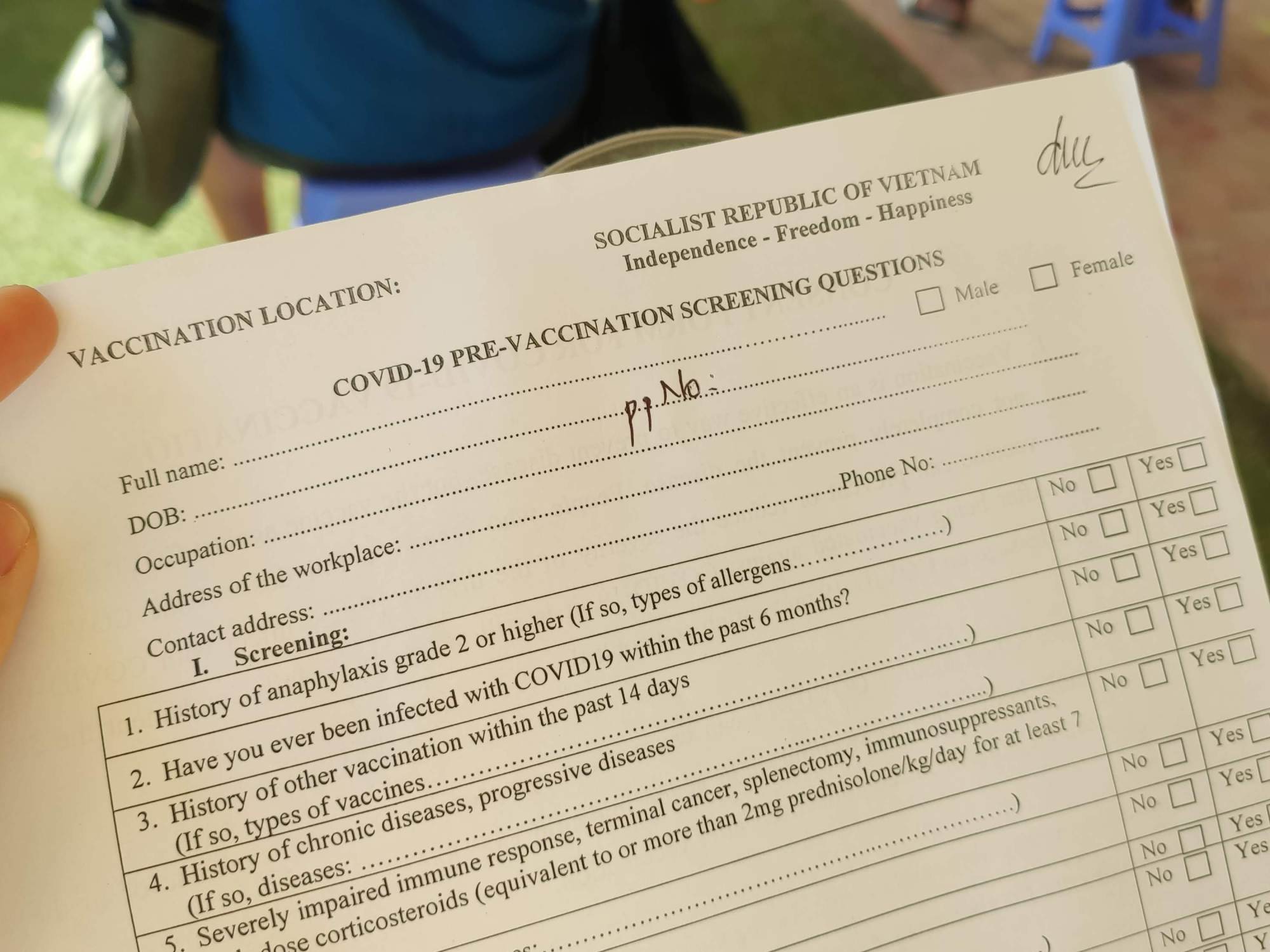 On Monday my partner and I received our first Covid-19 vaccine jab here in Ho Chi Minh City. We were relieved and, even more so, surprised it actually happened.

At first, vaccination seemed like a faraway dream. Vietnam has the lowest vaccination rate in South East Asia, and for the longest time no word of impending vaccination reached us on the Facebook grapevine (which is how we seem to hear of everything of significance).

Having finally heard from a friend that some private medical clinics were taking registration for businesses and individuals, we signed ourselves up as business owners (which we are) with a private clinic in early July, and were told that we’d receive confirmation of the vaccine—which would be either Astra Zeneca or Sputnik—in the third week of July.

Against all odds (not), the third week of July passed, then the fourth. We called up the clinic, no news.

Then on 2nd August, I saw on Facebook a post sharing a link to a Google form that the poster claimed was for vaccine registration in our ward. Weary of inputting our passport and personal information into an unknown form, my partner and I decided to check with our building manager to see if the form is legit.

The next morning, I wrote our building manager and she confirmed that yes, the form is an official registration form.

That morning, with the help of Google Translate, a Vietnamese friend, and our building manager, we filled in the all-Vietnamese form. Then the wait continued.

That week, we began hearing (again, from Facebook) more and more news of vaccination being organised across the ward. Two days after registering on the Google form, the building manager asked us for our details again to register directly with the police as residents in the building.

Things were looking hopeful. The vaccines being administered were even the good ones: Astra Zeneca, Moderna, Pfizer. A conversation with my partner ensued where we entertained the thought of being given the choice of vaccine.

Pfizer, we decided. We’d go for Pfizer, then Moderna, then Astra. If given the choice.

A few days later, we discovered from the Facebook grapevine a vaccination schedule for our ward. And based on the age bracket, my partner would be getting his vaccine on 16th August, this past Monday. If vaccination continued at the same pace, I can expect to get mine a couple of weeks after.

But then, as luck would have it, Ho Chi Minh City ran out of the aforementioned vaccines and the planned schedule was cancelled. Once again, we were left in the unknown.

Then, on the afternoon of Sunday 15th August, I saw yet another Facebook post sharing an official notice for building managers to submit the list of people who consent to being vaccinated with the Chinese dose, Sinopharm. The deadline being that same day (the document was dated 14th August), I wrote our building manager to ask if she knew anything about this. She didn’t.

But our building manager being the gem that she is, she followed up for us and asked around. And that evening shared with us that there will be a mass vaccination the following day, and that if we were happy with Sinopharm, we could go to the site during our allotted slot of 1:45-2:45pm.

This was a deterioration in situation for my partner, who would have gotten his Astra Zeneca shot that Monday, but an improvement in my situation as previously I had no idea when I’d receive my first jab. In any case, we were relieved and my partner cancelled work for the afternoon.

Then, this being Vietnam, the ward changed their plans on the day and on Monday morning our building manager told us to go to the vaccination site now to get our number, then return later in the day for the vaccine. My partner, frustrated, cancelled his morning work and off we went to the site.

Then, in another twist, we were told at the site that foreigners should go to a different address. So, having just parked our bike, we mounted it again and rode off to the second address. Thankfully we were admitted this time, given the pre-vaccination form and seated on socially-distanced seats.

Lucky for us, we arrived early enough that there were still spots available (people were turned away once the seats were all occupied), and after waiting for an hour and a half, we received our first jab of Sinopharm.

First we weren’t going to get any vaccine, then we were going to get Astra Zeneca, then there wasn’t any, and finally, after so many twists and turns, we got our Sinopharm jab.

Moral of the story: This is Vietnam.

IF YOU’VE ENJOYED THIS POST, CHECK OUT MY NEWSLETTER, “VAL THINKS.”

Each Friday, I send you a thought for your metaphorical penny, a thought that may put a smile on your face or a tear in your eye, maybe even change your life. I write from lived experience and deep reflection, and I send you only the best.

Check it out and subscribe, and let me know what you think.